If it isn't one thing, it's another.

Nobody wants the blue cup. They all - down to the toddler to who can't even talk yet - are demanding the red one.

There is a giant mess in the family room that it seems was caused by anyone and everyone except "me". And all parties are equally and dramatically offended that their names might be mentioned in association with such an atrocity (and project).

And, for the sake of everyone's sanity, you are wracking your brain to try to remember which one of the kids it was who actually found that McDonald's toy in the library parking lot and staked his claim to it, because you can sense yet another property dispute coming on.

You feel like one of those poor cows you see in the field so encrusted with flies she only makes a halfhearted attempt to shoo them away with her tail. Why bother? Another will just land in it's place. Sigh.

You feel completely and utterly drained from the constant sibling bickering. You wish there was a kid-remote somewhere so that you could just click the "mute" button, close your eyes and pretend the drama wasn't happening. 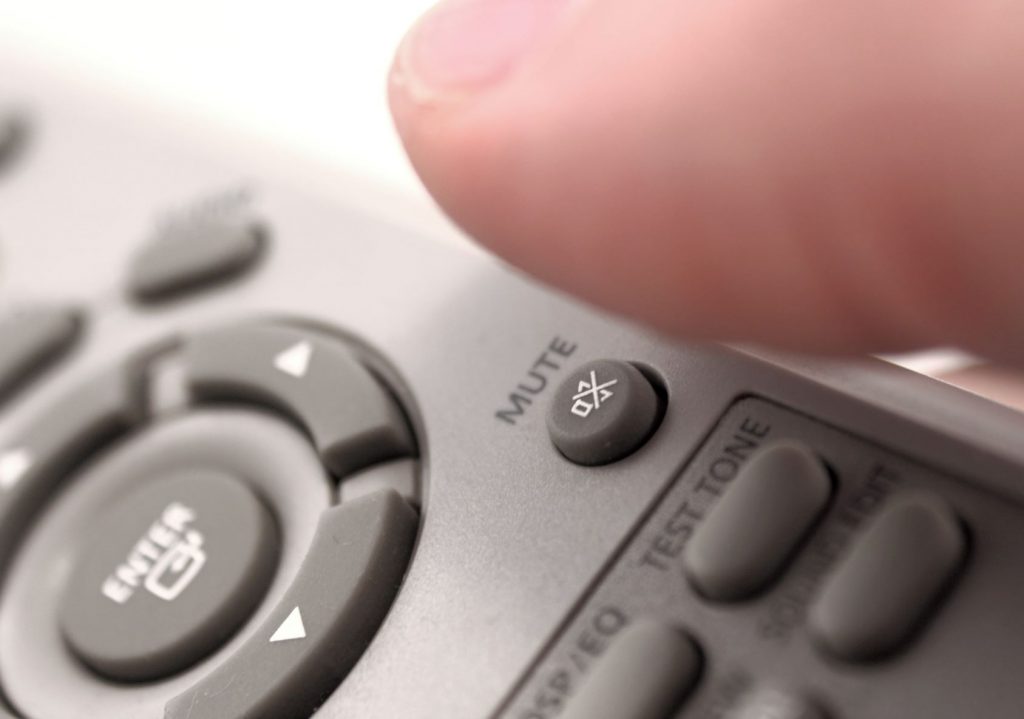 Before you can address sibling conflict in a helpful, healthy, and productive way, you all need some room to breath. You need some relief from the overwhelm and I've got five suggestions.

1. You are allowed to stop trying. For now.

You're overwhelmed because the bickering is sounding off two alarms in your head ...

But what? What should you do? You've tried commanding them "talk nicely". You've tried issuing warnings of impending consequences if they don't get along. You've tried making all kinds of creative suggestions. Now you just feel discouraged and defeated.

It means they don't know how to diffuse the tension that's been building and they need a safety release valve.

And you, mom, need to relieve yourself of the pressure to fix them.

Stop telling yourself that all of your hard work and careful lessons have been wasted. Stop believing that it will only get worse if you don't manage the character issue right this minute.

To have some quiet time.

To get some fresh air.

To have a hug. 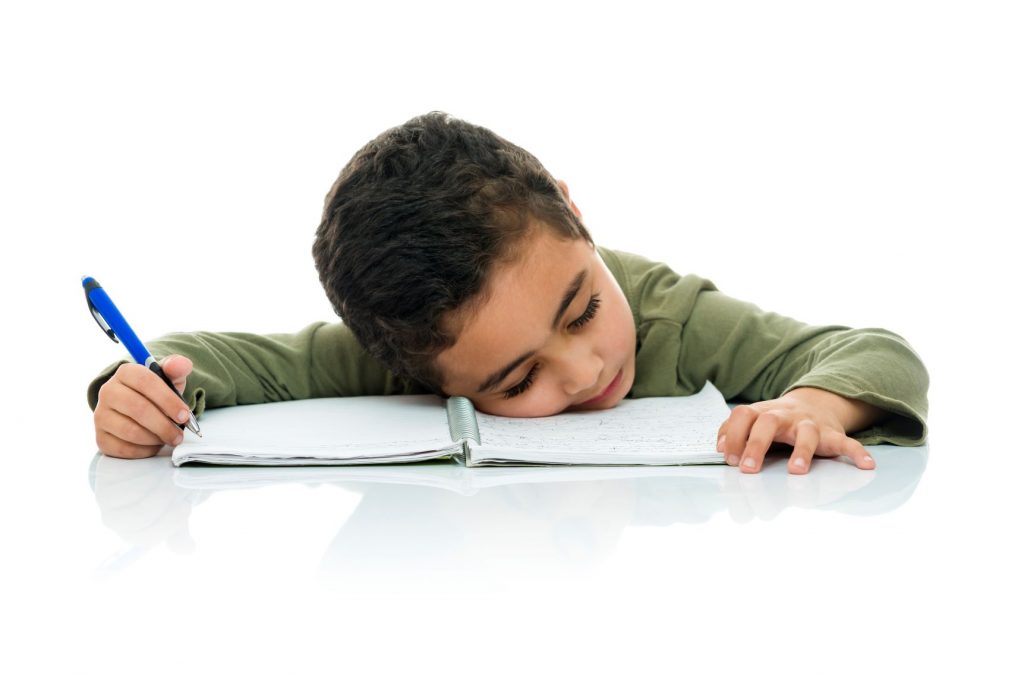 You understand that you'll need to return to it another time. But you also understand that at a certain point, neither of you has what it takes to facilitate any further real learning.

Step away - guilt free - from this one and return to the learning another day from another angle.

If your kids are constantly fighting over that one red cup, here's an idea. Get a few more red cups. Or, perhaps, orchestrate a strange and mysterious disappearance of the red cup. At least for today.

No, it isn't really about the red cup. And yes, lessons in sharing and kindness and gentle speech are all important. But there will be lots (and lots and lots) of other opportunities for practicing that. I promise.

Sometimes a particular object has so much emotion attached to it, so much baggage from past hurts and disappointments, that it's just too much to ask a child to mentally separate all that out. There's no way he can possibly think of this as simply a thing that facilitates getting water from the faucet to your throat.

Think of it like this. Is there a name - one name in particular - you could never, ever name one of your kids because you knew someone with that name and the negative associations are just too strong - you'll never hear that name without feeling those feelings? Yea, that's what the red-cup-saga is like for your kid.

If you are overwhelmed with all of the bickering and you can reduce a large portion of it by managing a couple simple issues of tangible property, then for the sanity of everyone in your home, do it! 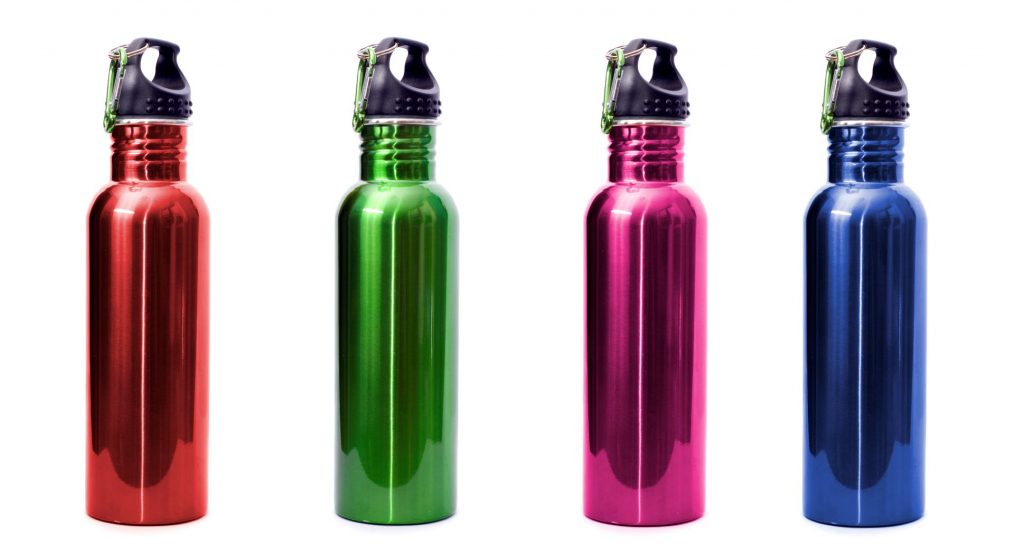 Label the things so there's no doubt about who owns them.

Get one of the same for everybody.

Put that highly coveted item out of circulation for the day.

Give everybody a designated spot to store special items.

Bring out something new and non-triggering to redirect their attention.

An overwhelmed and emotionally drained mama is not going to be best prepared for gentle sibling guidance anyway. Save your strength for issues that aren't as emotionally charged and could be better learning examples. 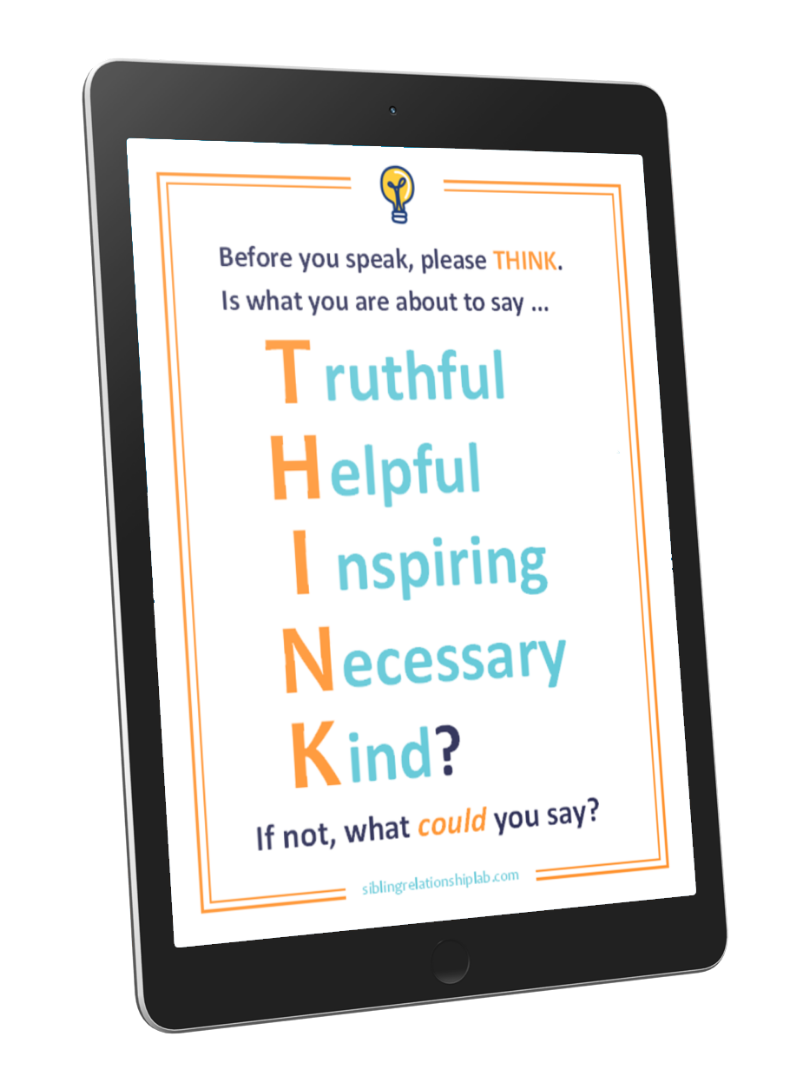 Join the Sibling Relationship Lab mailing list and we'll send you this free guide - mini poster plus Scripture verses and discussion suggestions - so you can help your kids to THINK before they speak!

3. Praise God from whom all devices flow.

Check out the window. See if there is a prim and proper British lady descending from the clouds by umbrella. No? If God has not sent you a nanny, then perhaps he has sent you something that can keep the kids occupied for a while in her place.

I know, I know. Screen time is unpopular in "good" parenting circles. Devices absorb our attention and isolate us from the real, live people around us.

If isolation and screen-absorption is the norm, that's not a healthy plan and it certainly won't help you make long-term strides towards relationship growth.

But digital technology, like any other created thing, is a gift from God. The good or evil are not found in the device, but in how you use it. And you can use it to bless those around you with a little respite from one another and a bit of "alone time" even in a house full of people. 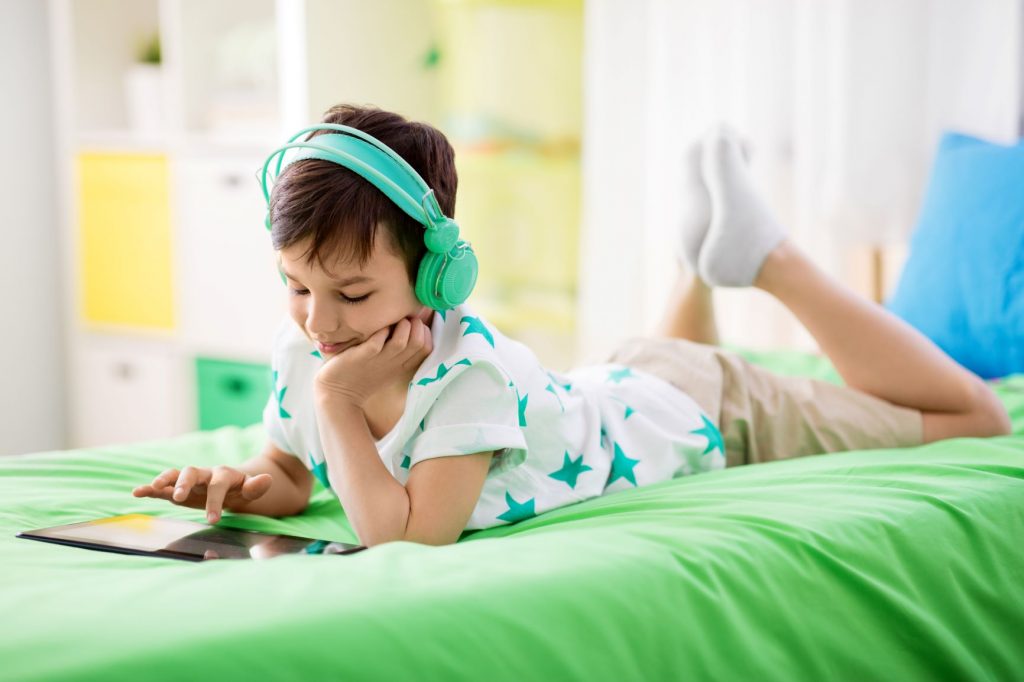 Side note: What if the device is the "red cup" in your house? Apply some of the suggestions above.

Get more than one.

Make the expectations clear about when each person will have a turn so there's no panic.

Have a desirable alternative for those not having a turn.

Remove it from circulation for the day if that's really what's in the best interest of the family.

4. Spare them (and everyone else) the decision fatigue.

Just don't ask them to decide who is going to sit in the front seat. Don't consult their opinion about which movie you should watch tonight.

Spare them the burden of a task they're not up to handling right now. Make the decision for them.

Don't wrench the decision making from their hands like a punishment or a slap on the wrist for bad behavior. Don't parade in front of them the would-be opportunity that you're now denying them to "teach them a lesson". 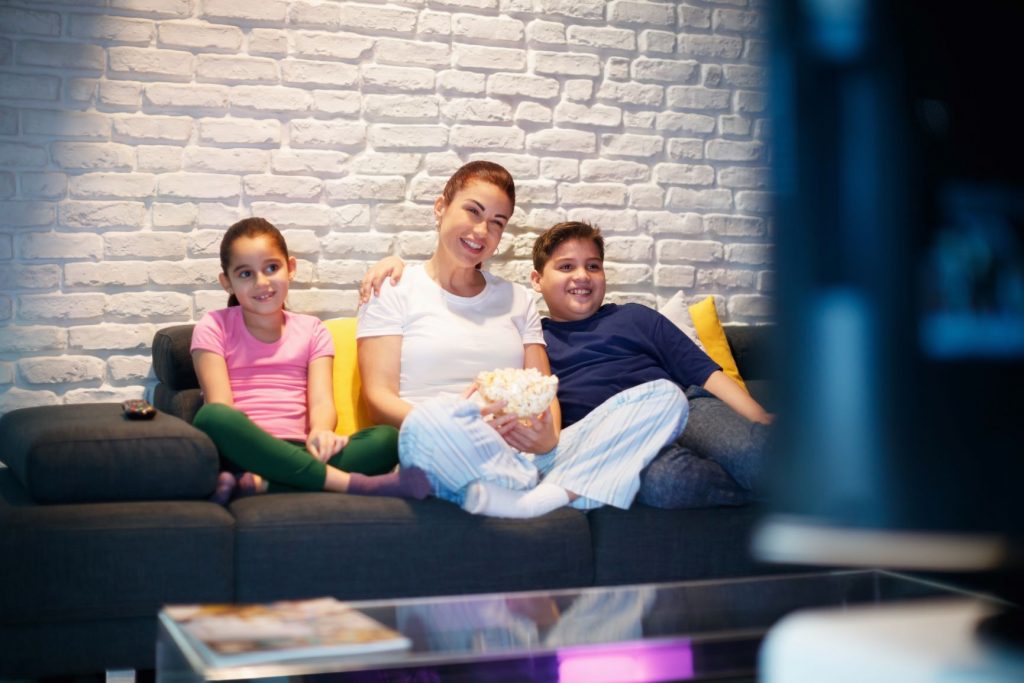 Just do it for them as an act of kindness. Enthusiastically announce the movie everyone will be watching tonight. Calmly explain the simple plan for who will sit in the front seat when.

There will be good, rousing decision-making and articulate, mentally stimulating negotiations another day.

But it is not this day.

I know on these days the temptation is strong to run to your room and hide under the covers. Or grab the half-gallon of ice cream out of the freezer and eat it alone in the bathroom. And that's not necessarily a wrong inclination. 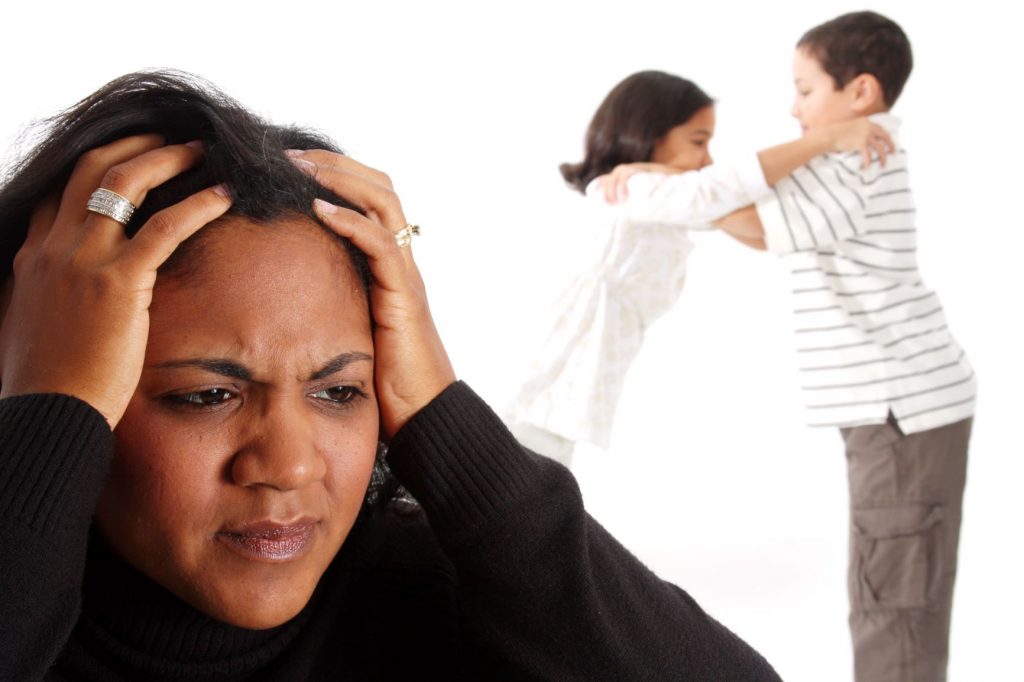 But here's another idea. Go hide out in your room for a bit, but take one of the kids with you. Maybe the one who seems to be the center of the controversy - the one who gets into tiffs with anyone who crosses her path.

If she's little, you can scoop her up and wrap your arms around her. If she's bigger, maybe scoop her up some of that ice cream.

If you hide in your room alone, the bickering is likely to wage on unmitigated. But if you take one kid with you, not only will you "divide and conquer," you'll be doing something even better.

Last night as I was brushing my tween daughter's hair before bed, I asked her "When you and your siblings are in a bad cycle of bickering and arguing, what is it that you most need mama to do for you?"

I expected that she'd want me to settle fights or hand out justice. Instead, this is what she said,

I guess I just want to know that you're not really angry or disappointed with me.

Stop the cycle by letting them know that you don't love them any less on the tough days. Give them safety and security to hold onto on an unstable day. 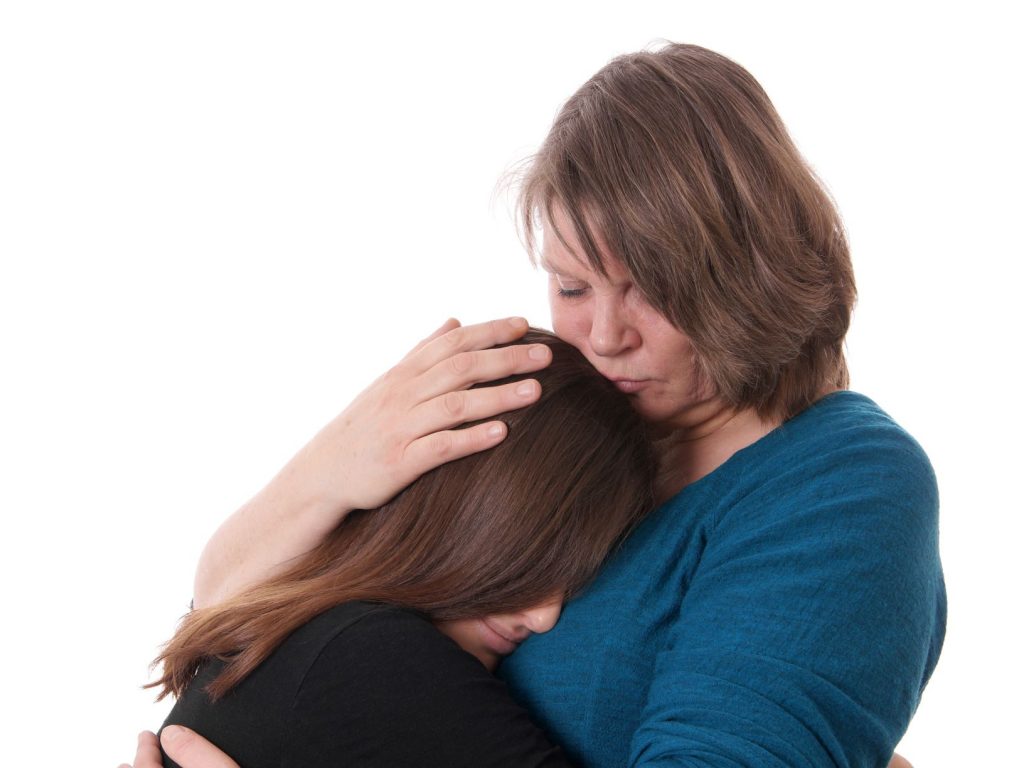 Grab a break from all the chaos and rescue the most needy child along with you. You might be surprised at the good it can do.